Hell Raisers: What Can Brands Learn from Dancing with the Devil?

Just over a week ago, Lil Nas X graced us with his presence in the Twitterverse to premier his new single – now gay anthem – “MONTERO (Call Me by Your Name)”. The song itself is what a lot of music is about: love. However, the video is what blew up our feeds and had everyone from your Aunt Karen to Nike talking about it.

The video is a crystal-encrusted Missy Elliott (via ‘Work It’) inspired nod to the story of Lucifer and his infamous fall from heaven. The scenes from the video depict Lil Nas X in the role of Lucifer ascending down a stripper pole on his way to hell. Spoiler: he lands on the lap of the devil, seduces him (and all of us) and ultimately takes his place on the throne of Hell. The film is fun, sexy, wild entertainment…And yes, set a bomb off on the internet.

Maybe we on the Mint Strategy team had a case of Baader-Meinhof. Maybe it was the Silicon Valley algorithm gods creating our fate. But after watching “MONTERO,” the devil started showing up everywhere: 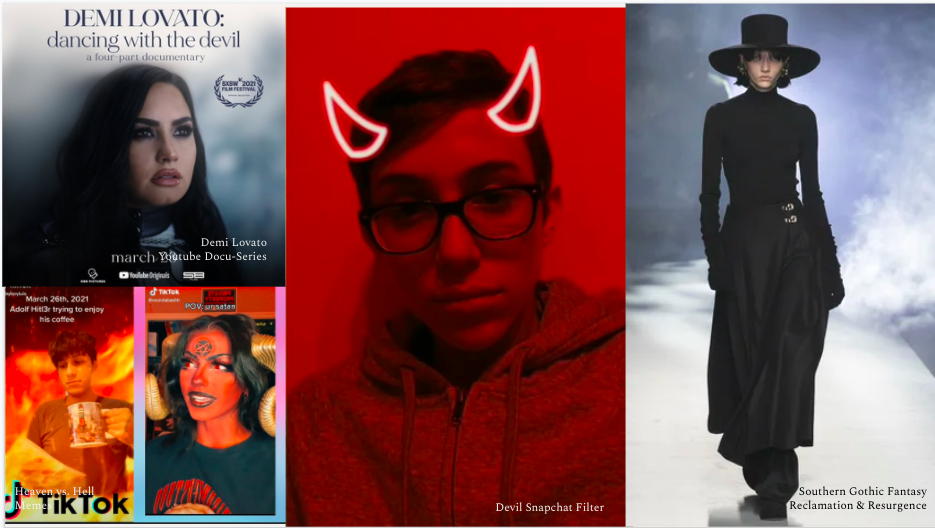 Okay, so why is the devil so hot right now in western culture, and what does that mean – if anything – for brands?

We started at the beginning: who is Lucifer and what has his role been in society after he became Satan? And most importantly, why is this relevant today?

We found that Satan is THE OG rebel. It’s quite possible that the devil invented ‘punk’*. Satan was and continues to be “a symbol of rebellion against blind faith” as director Penny Lane puts it. And, oh boy, if 2020 – 2021 has shown us anything, it’s that we, collectively, are embracing the best parts of hellish-rebellion.

2020 forced us to look at what we’ve been blindly faithful to—systems,  institutions, status quos and expectations—and question ourselves to reflect on who we’ve been and what could/should change. The result has been continuous acts of ‘rebellion’ that shift societal thinking.

For the first time in a long time, society is continually supporting trans-rights, the national acknowledgement of missing and murdered indigenous women, the cries for the abolishment of racist systems beyond the US and putting a bright spotlight on the climate crisis.
We are continuing to question and challenge the world as it is and rebelling against blind faith.

Stunning. Good job, society. Love that for us!

Do brands have a part to play in society’s rebellion? The short answer: hell yes.

Now we don’t think sticking devil horns on everything in your next campaign is necessarily the move, unless you’re Match.com, or Dirt Devil, but we do think what society and Satan’s trying to tell us about the value of active rebellion against blind faith is something brands should at least think about.

It’s actually pretty simple if you think about it, it’s what we as strategists and marketers should always be doing:

Listen up to what’s happening around you

Brands these days are made to lead. Or, as the devil would say, raise a little Hell.

*we don’t actually have any evidence that Satan invented punk, we just thought it was a cool way to describe rebellion, don’t @ us.